On the long drive from Albuquerque to White Sands National Monument, in the dark with the moon appearing intermittently to silhouette the surrounding landscape, Eric and I chatted about our childhoods. We’re generally undecided about the possibility of children in our own future, but these conversations come up every now and again.

Until the advent of the internet in our house, circa 2004, I was a kid who played outside, and I often played alone. We didn’t have neighbors, and being the oldest provides a certain level of independence. I did a lot of imagining, a lot of wandering, and a lot of talking to myself. I remember hours spent in the woods, trying to find a new way to cross the creek (I fell in more than once), climbing trees, following the border of my parents’ property, and never crossing the stone wall that defined it (I’m an adventurer, but a rule-follower first).  I collected pine cones and nuts, and dug in the dirt by the doghouse to find shards of pottery tossed there pre-1940s, before my grandparents moved into the house. 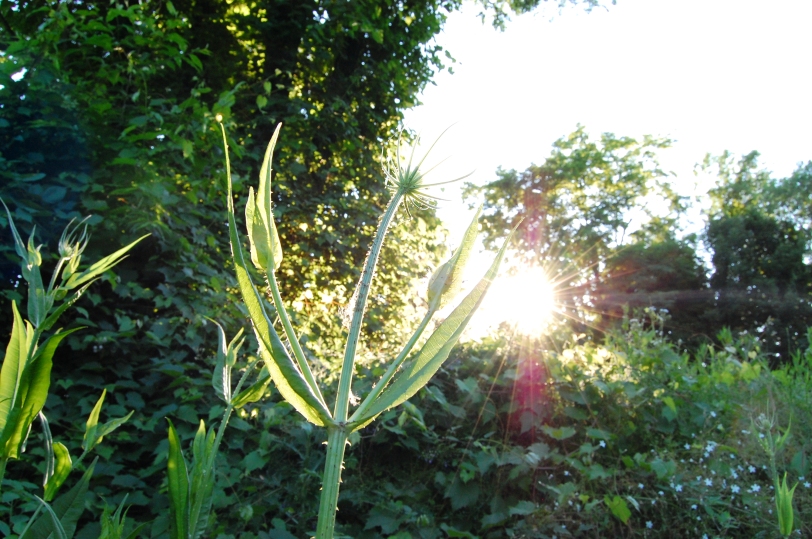 Despite all this time alone, one of my most distinct memories is of some game of make-believe with my sister and brother, in the dusk in our backyard. I’m wearing this dress from the crate of dress-up clothes we had. It was a pink and purple floaty twirly thing that I constantly snagged on brambles and branches. I wore until I ripped it trying to put it on because it no longer fit. I must be 10 or 11 in the memory, my brother 5 or 6 and my sister 8 or 9. One of us is in a tree by the old barn, one of us is brandishing a stick as a sword by the wood pile, and we’re all running around in the yard until it is  too dark to see where we’re going, and we have to run toward the glow of the back porch light. I remember yelling, and a general sense of joy.

Eric was a mostly indoor kid. Lots of gaming systems and computers. And I don’t have any qualms about that – it developed into a passion that has served him well, and a career doing something he loves, which also happens to be very lucrative – it’s a wonderful combination.

I played inside a lot too – I’d imagine especially during the winter months- and I had phases of being similarly tech-obsessed, albeit at a less sophisticated level. Our family computer pre-internet had Jill of the Jungle, Mahjong Tiles, and Crystal Caves, which I remember playing until I exhausted the free levels. I got a GameBoy Advance at age 12 or 13 (my brother got one the same year) and played Zelda and Harry Potter and Pokemon games for a long while. I had one friend with a PlayStation, and I remember dying to play Frogger whenever I was at her house.

When we got the internet I was not allowed to get an instant messenger account (a prohibition that I circumvented as a junior in high school by getting some weird knockoff version instead of the real AIM), but a friend of mine set me up with a Xanga. It was my first blog, and in fact the predecessor to this one, because I don’t like change. I spent a lot of time there, and it was the stage for much teenage angst and cryptic song-lyric posting. In a time when the internet was still mostly scary and unknown to me, I ventured out into the world of FanFiction, (and maybe MySpace?) but mostly stayed in a sphere of people I knew.

Although we had been friends before, my friendship with Eric really developed through online IM conversations junior year of high school. And when we started dating my senior year, he was in college, and I spent most of my waking time on the internet, or waiting for my siblings to get off the computer (these also being the days before I had a cell phone). My life became significantly more indoors after the internet, and boys.

We’ve found the balance in our relationship, or so I like to think. In college we spent a lot of time playing World of Warcraft and later League of Legends (both of which I enjoyed a lot), but we also went hiking and camping in the Adirondacks, and I would often drag him out around one of our campuses to just explore different buildings and get fresh air. Grad school doesn’t really provide the kind of time required for League of Legends, so now we watch TV or I do work while he plays games, but we probably do more outdoors stuff now than we used to.

I remember especially the role the outdoors played in my childhood, while Eric remembers the video and computer games. These don’t have to be opposing forces, but I wonder what it would take to find a balance between them for kids, especially now.

It was a long conversation over a long drive, and we didn’t really reach any conclusions. Which I think is fine because a) we’re not sure we want to have kids, b) if we do, not until several years after marriage, which itself is still several years off, and c) at that point it will all be different and we’ll have to re-hash the whole thing again anyway.

But it was a nice conversation for a drive.