A week ago we arrived back from the most fantastic road trip to Utah. Clare, Anna, and I spent five nights camping, visited all five National Parks in the state, and hiked or walked nearly forty miles in all.

We decided to start with Zion. Initially called Mukuntuweap, from a Paiute word meaning “straight up land,” it was founded as a National Monument in 1909, had its name changed to Zion in 1918, and became a National Park in 1919.

We departed Seattle early on a Saturday morning, and made it to Twin Falls, ID by nightfall, where we enjoyed views of Shoshone Falls and dinner at Janitzio. Sunday we paused in Salt Lake City to pick up a few essentials, but made it to Zion in time for a short walk and to cook dinner. We were camping in the Watchman Campground just inside the park boundary, and it was superb. Clean and well-cared for, with plentiful water and a dish-washing station, and a short walk to the visitor center and the shuttle. Very luxurious! We made reservations about six months in advance, which I’d definitely advise doing.

A note on the shuttle system: we loved it. We never waited longer than five minutes for a bus*, and we found it so easy to just get on and off wherever we pleased without worrying about parking. Also, since no one had to drive, we could all enjoy gazing at the scenery! Just pack a day bag with plenty of water and snacks, and try to see as much as you can.

*Just a follow-up note on the shuttle: it looks like lines can get very long and the buses quite crowded in the summer and on holiday weekends. I strongly recommend a shoulder-season trip like ours. The weather was perfect (mid-to-upper 70s), there were hardly any lines, and the trails were populated but not super crowded. And, as always, be the early bird! Starting the day at 7am makes for so much more solitude and less stress.

On Monday we started with hiking the Emerald Pools trail, which was phenomenal. Soaring cliffs, hanging gardens, and plenty of waterfalls made the trail really enjoyable. My favorite part was the Upper Emerald Pools waterfall, appearing seemingly right out of this cliff.

I also really loved the first part of the trail, which included walking under these light waterfalls.

That afternoon we hiked the Riverside Trail to the start of the Narrows (which was closed due to the fast-moving and full river), and then the short trail to Weeping Rock.

The view from under Weeping Rock.

I was pretty ill that afternoon and evening (a combination of heat and altitude, I think), but my travel companions took excellent care of me. They brought me some saltines and ginger ale, and on Tuesday morning I was feeling slightly better, so we set off to hike the Angels Landing trail.

Anna on the first switchbacks of the trail. 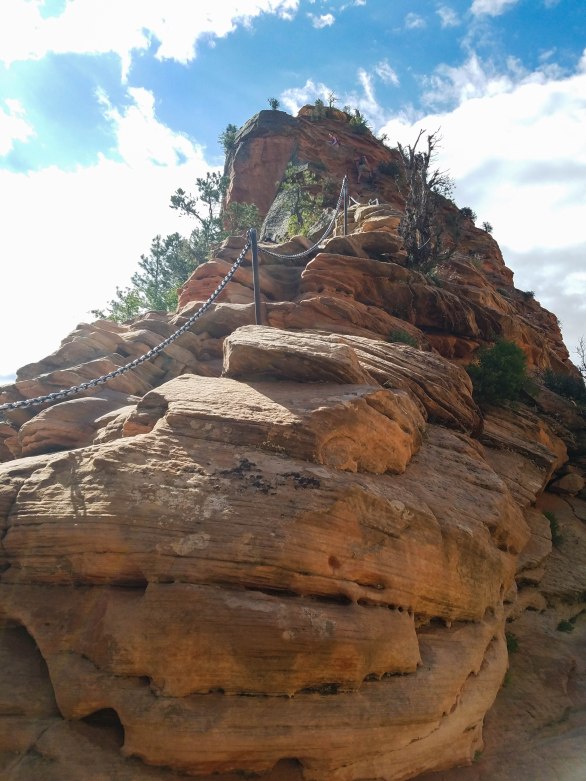 Chains on the way up.

My best advice for this one is to start very early. We took the first shuttle, starting hiking a bit after 7:30, and made it to the top by around 8:30 or 9. By the time we started down it was already getting crowded. The last section of the trail is precarious, climbing sandstone and clinging to chains, and I would have been so anxious doing it with more people around. I would also not advise trying this one in less than ideal conditions. Pick a day without much wind and definitely without rain. There’s a lot of slick sandstone and several exposed areas with huge drops on either side.

I have a somewhat moderate fear of heights, mostly with things like grated platforms and open stairs, or standing near railings several stories up, where I’ll get panicky or slightly lightheaded. Despite a few spots with large drops on either side, this trail is solid rock the whole way, and your feet are almost always planted on stable ground, with chains to hold on to as well. I felt pretty secure for most of it, going slowly and clinging to the chains, but I would not have wanted to do this in inclement weather or while trying to contend with lots of people trying to get around me. I stopped every few minutes and evaluated my anxiety level and looked ahead, and my friends did the same. We checked with each other often on how we felt and whether we wanted to keep going.

I highly recommend this trail, but be sure you’re comfortable. The views are incredible, but safety should be your primary concern. If you’re anxious or dizzy, stop until you feel better or just stop altogether. Don’t feel pressure from other people in your group or from others on the trail. Stay safe! 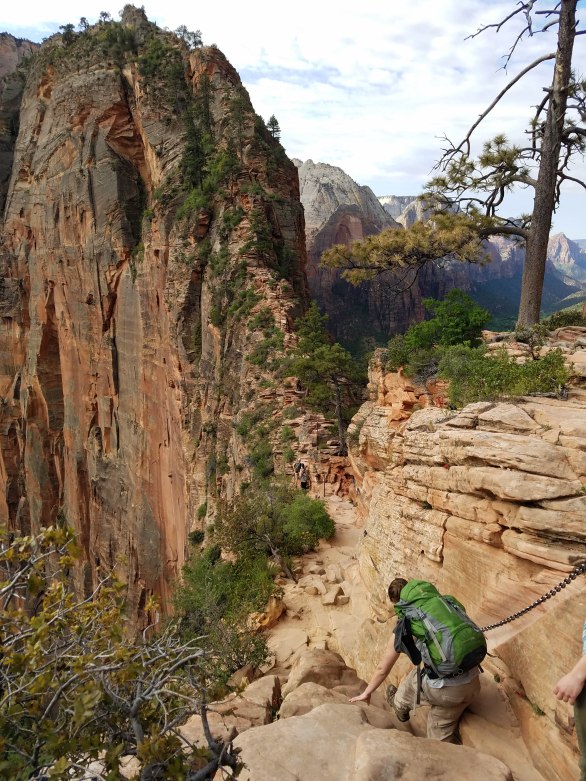 The trail clambers along that ridgeline right in front of us.

All that said, this was one of the most phenomenal trails I’ve ever hiked. The views were simply stunning in every direction. I was a little anxious for parts of it, but by taking it slowly and carefully, we all made it to the top and back again safely, and it was so worth it. Marvelous views all around, of the canyon and the river and the sky. Simply fantastic.

The ridgeline again, viewed from the top.

Sheer cliffs to the right of the trail as we were going up. 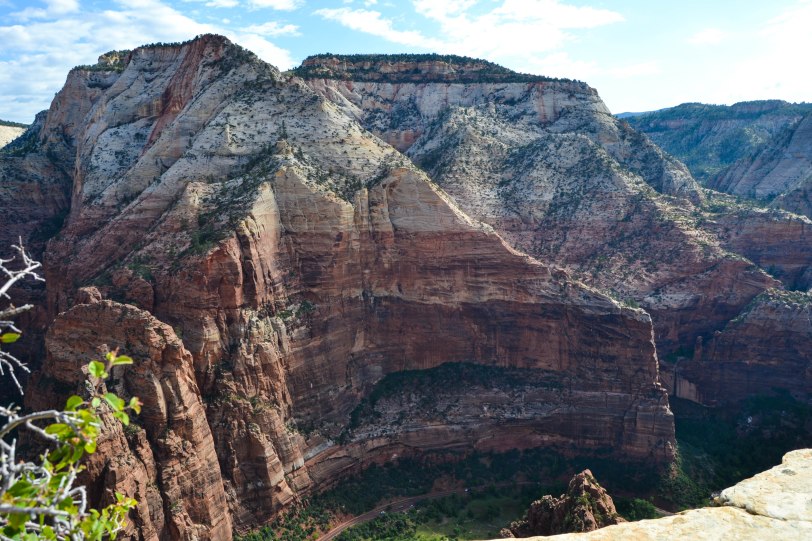 The canyon road visible below. 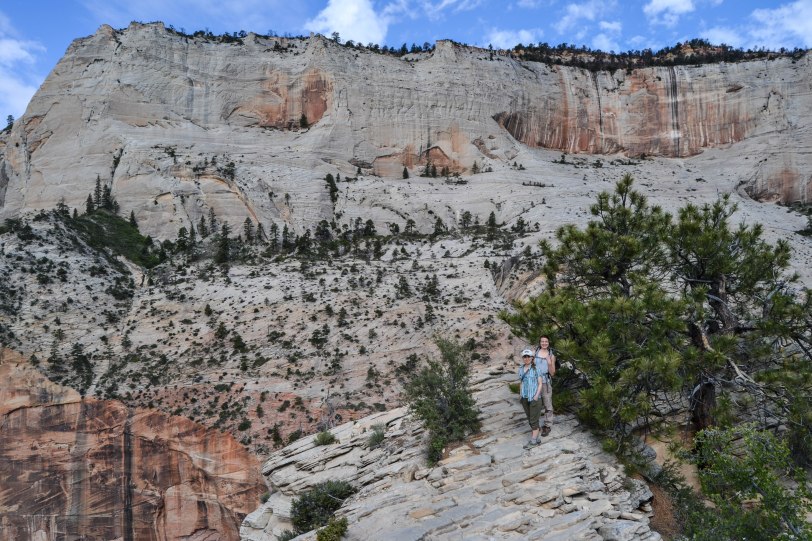 With the rest of our Tuesday we paused to see the Court of the Patriarchs, visited the museum, and got our passports stamped at the visitor center. Still being slightly queasy, I sat out Clare and Anna’s evening trek along the Watchman trail, but enjoyed sitting around the fire and chatting before bed.

This park really was incredible. Huge sheer cliffs and canyon walls, but so many lush plants growing alongside shady springs, seeping groundwater, and in the river valley. Even though we saw and did so much, I would absolutely go back.

On Wednesday we started early, driving east out of the park, through the Zion-Mount Carmel tunnel built by the CCC in 1930, and headed off to our next destinations: Bryce Canyon and Capitol Reef.

More photos of this whole trip can be found on my Flickr page. Enjoy!