For this third post in the series, I’m talking about accommodation when traveling. As I’ve stated previously, when I travel I like to pack my days full of sightseeing, food, and generally being out and about. As such, I’m very much a no-frills person when it comes to accommodation. Why spend hundreds of dollars on rooms you’ll only sleep in? The beauty of European travel is the prevalence of inexpensive accommodation.

When I traveled in Europe in 2011-2012 I stayed almost exclusively in hostel dorms. To date I’ve stayed in at least 22 different hostels for between one and five nights each. Despite a few sketchier/shadier ones, I’ve had very good experiences and absolutely recommend them to everyone traveling in Europe. Here are a few tips I’ve picked up: 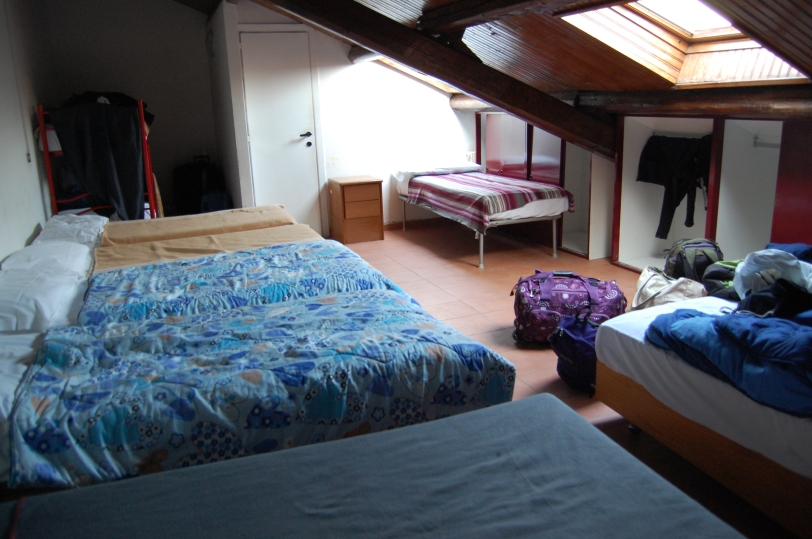 1) Be Bold. Be sure to speak up if you don’t get the room you reserved. In Rome my friend and I were shown to a smoke-filled 8-bed room with two men occupying it, when we had clearly reserved a four-bed girls’ dorm. We spoke up, showed our confirmation, and we were taken to another room. It involved a 10-minute walk to another apartment (quite common in Italy to use converted apartments), but we ended up with the whole place to ourselves, including the kitchen and bathroom.

2) Bring Shower Shoes. Need I say more? Just a pair of cheap flip flops gave me remarkable peace of mind. I also brought my own towel and pillowcase for extra cleanliness, and because some hostels do not provide free towels. If you’re using the kitchen to cook, check what pots, pans, and utensils they have before deciding what you’ll make.

3) Keep Valuables Close. I’ve been very lucky and (knock on wood) never had anything stolen at a hostel. Sometimes there are lockers you can use in the room – the nicest ones provide keys, others have you pay to use them. It’s worth splashing out for the key, or bring your own lock if you’d like. Despite the lockers, I always slept with my purse (containing passport, wallet, camera, and other valuables) next to my chest on the wall side of the bed, often with the long strap wrapped around my wrist. In rooms with no lockers, I usually kept my backpack on the bed with me as well, top bunk if I could manage it. When traveling with friends we’d watch each other’s things while showering, but on my own I took my most valuable objects with me and hung them in a dry space within sight. Just be smart and stay alert.

4) Elevators are a Luxury: Use a Backpack. I’m writing a separate packing post, but for the love of everything holy, use a backpack! Wheeled cases are a struggle on every type of transit and on stairs and on cobbled streets. If you pack smartly you won’t even need a true backpacking pack, and it’s great to have your hands free at all times.

5) Use hostelworld.com or hostels.com. They’re both pretty much the same. I have accounts with both, but have started using hostelworld exclusively just so I can track everything more easily. Great search features, easy booking. You usually pay a deposit when booking and the rest when you get to the hostel. You can also book private rooms through the sites, which Eric and I did for this trip (see below). As with everything, read reviews at your own risk, but be sure to write a review as well when they send you the prompt after your stay. 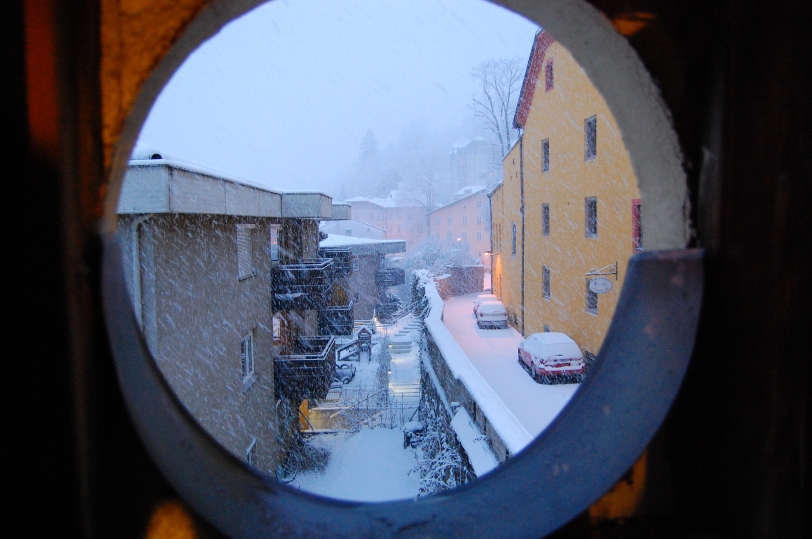 View from the Pension Glockenhaus, Innsbruck. (Can’t find a link!)

6) Germany and Austria have Great Hostels. Okay, not exactly a tip, but I’m serious. They’re clean, modern, and often have wonderful breakfasts included. A couple of my favorites are interspersed throughout this post.

Hostel dorm rooms vary based on a number of factors, including the amount of beds in the room (higher number = cheaper per bed), the bathroom situation (more $ for an ensuite, less for a shared dorm-style bathroom), the time of the year/week (more $ for weekend nights and summers), and the location of the dorm in the city (usually more expensive closer to the city center, though this can vary). Prices may also depend on the country/city you’re in. Despite loving Germany’s hostels, they proved a bit more expensive than those in Greece and Italy that I’ve stayed in. However, many of them also included breakfast, a luxury not found in some of the others. As with everything, weigh the amenities and options to decide how best to spend your money.

In Europe I’d usually try to budget about $15 USD per person per night for dorms, expecting to spend a bit more in some places and a bit less in others. During my four weeks of hostel-hopping in 2011-2012, I think that the highest I spent was probably about $25 per night, and the lowest only about $7.

I’ve also stayed in hostels in Vancouver, B.C. and Washington, D.C. During the latter I was there for a professional conference, but couldn’t afford a hotel. It was a little trickier getting ready in a dorm room than it would have been in a hotel, but it was really worth the money I saved. Hostels haven’t completely caught on in North America, and both felt like they weren’t as well-run or kept up as ones I’ve stayed at in Europe. The dorm rooms I’ve rented in North America have run me $35-$45 per night, which isn’t that much cheaper than splitting a $50 Motel 6/Super 8 room with a friend, and definitely more expensive than camping if you’ve got access to it.

We’ll be staying in Prague for six nights, so we opted for a rental apartment there. An apartment was ideal for us since we’ll be in Prague longer – a full kitchen to cook, a washer to do laundry, and just a little more space to spread out and have to ourselves. Plus I feel like it’s a bit more of an immersive experience, and it feels luxurious even though it’s not expensive. We have used both Airbnb and Homeaway in the past (Maui and the Big Island, respectively) and had good results, but we opted for Airbnb this time because the selection seemed more promising.  The apartment we chose looks lovely, and it’s out of the city center just a bit. I’ll report back after we’ve stayed, but I’m really quite excited!

Please take note that all photos were taken in 2011 or early 2012, and that I have not visited these hostels since then.